Sandra, a 75 year old single female, was found lying on the floor of her home by her long-time neighbor. She was not oriented to who she was, where she lived, or the year. She was brought to the emergency room and found to have a urinary tract infection, sepsis (a blood infection), and an exacerbation of pre-existing congestive heart failure.

Sandra was hospitalized on the intensive care unit (ICU) for three days and treated with antibiotics for her infection. While she was in the hospital, she thought she was in her childhood home and only sometimes recognized her neighbor. By the end of the week, she was able to recognize her neighbor and knew the date. She was discharged back home with a home health 12 hours a day 3 times a week.

Three months later, Sandra’s neighbor brought her to her primary care doctor for a follow-up appointment. The neighbor was quite concerned that she was now having some difficulties with keeping track of her new medication regimen, which had become more complicated since her ICU stay. Sandra was able to get to familiar places but could not figure out how to go new places even when she used her GPS. She also seemed slightly withdrawn and would get easily frustrated about “small things.”

Researchers still do not fully understand the long-term cognitive impairment (LTCI) from ICU delirium. About 50-70% of all ICU survivors suffer from a cognitive, psychological or functional impairment after their ICU hospitalization. About 30-80% of ICU patients develop cognitive deficits, making it a serious but under recognized problem. Risk factors for ICU-acquired long-term cognitive impairment (LTCI) in older adults include neurologic dysfunction, infection or severe sepsis, and acute dialysis. Duration of delirium is a risk factor for LTCI for adults of any age. 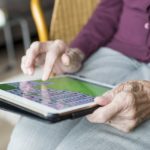 Sandra was referred to a neuropsychologist for a lengthier evaluation. The evaluation found that Sandra had mild to moderate cognitive difficulties, most notably in executive functioning and memory. Sandra also was noted to have mild depressive symptoms. She was referred to cognitive rehabilitation, at which she learned how to set up automated processes (e.g. automatic online bill pay) and reminders to help reduce her stress levels. She also participated in cognitive behavioral therapy to address her depressive symptoms.

Over the next few months, Sandra noticed an improvement in her ability to learn information, as well as her in her mood. She was able to use the GPS to find new places, although sometimes she would make some wrong turns and need to correct herself. Her mood also improved.

However, she had another hospitalization for congestive heart failure exacerbation. It turned out that Sandra was having difficulty keeping track of her salt and fluid intake due to her persistent executive functioning deficits. At the recommendation of her primary care doctor, she agreed to move into an assisted living facility to help monitor her medical conditions more closely.

How is long-term cognitive impairment from ICU delirium different from Alzheimer’s disease?

The progression of LTCI is quite different from Alzheimer’s disease. The deficits from LTCI can improve one year after the initial insult, although some patients continue to have persistent deficits. In Alzheimer’s disease, patients’ cognition continue to progressively decline. LTCI also appears to affect multiple cognitive domains (executive functioning, memory, and attention). Alzheimer’s disease primarily affects memory, although other cognitive domains can be affected. Finally, LTCI may be associated with smaller superior frontal lobes, thalamus, and cerebellar volumes and white matter damage, whereas AD is classically associated with hippocampal atrophy. Interestingly, however, smaller hippocampal volumes are also associated with longer duration of delirium.

What is the workup and management for LTCI?

The Mini-Mental State Examination can often be normal in patients with LTCI because it is not sensitive to the executive functioning deficits. The Montreal Cognitive Assessment can sometimes show deficits, but longer cognitive screens such as Repeatable Battery for Neuropsychological Assessment (RBANS) in combination with executive functioning measures such as Trails A and B may be needed to capture the more subtle deficits seen in LTCI. Clinicians may also consider a detailed neuropsychological evaluation if this service is available, but this battery should perform at least a few months after the hospitalization to capture a more accurate picture of the new baseline. Also, patients with significant physical deficits may not be able to tolerate a lengthy test battery that can last up to three hours. There are no FDA approved treatments for LTCI. Cognitive rehabilitation to address certain type of deficits can be helpful in some individuals, and the IMPROVE trial is looking at the efficacy of a cognitive and physical training program to ameliorate LTCI deficits.

Although post-ICU depression and LTCI are separate phenomena, clinicians should also carefully examine their post-ICU patients with LTCI for depression. Depression is classically associated with worse executive functioning, and can worsen already existing cognitive deficits from LTCI. Antidepressants and depression-focused psychotherapies such as cognitive behavioral therapy should be considered. If patients do not respond to these initial approaches or have a history of being in mental health treatment, a mental health referral should also be made.

This post was contributed by Sophia Wang, MD. Dr. Wang is a geriatric psychiatrist and Assistant Professor of Clinical Psychiatry at Indiana University.