In our recent pilot study,4 we evaluated whether postoperative delirium risk was associated with the complexity of perioperative brain electrical signals. Specifically, we measured the multi-scale entropy (MSE) of the frontal electroencephalogram (EEG) in 50 subjects age ≥ 60 years undergoing non-cardiac, non-neurological surgery, a subset of the larger INTUIT cohort.5 Because delirium rates were low within this group (14% or 7/50 for our subgroup), we calculated a delirium severity score based on the raw 3DCAM (sum of all positive questions) and an inattention severity score (sum of all positive responses for attention-related 3DCAM questions).6

In contrast to our original hypothesis that EEG complexity would decrease under anesthesia, average frontal EEG complexity, measured as the area under the entropy-by-scale curve (AUC), was greater in the intra-operative, anesthetized condition than in the pre-operative, awake eyes closed condition (p=0.0003).

Further, when we plotted MSE as a function of scale, we observed that subjects’ pre-operative eyes-closed and intra-operative mean MSE curves typically intersected or “crossed over” each other. As shown in Figure 1, greater complexity values were significantly more likely occur at longer scales during anesthesia / surgery than before (p < 0.001, 2 conditions x 25 scales ANOVA).

We hypothesized that this previously undescribed “crossover” phenomenon might capture clinically useful information about the impact of surgery and anesthesia on brain activity. Thus, we evaluated complexity-based EEG metrics (AUC values and “crossover” point) as potential predictors of the change in delirium-symptom severity or inattention scores from baseline to postoperative day 1. Among the 84% (42 of 50) of subjects whose MSE curves crossed only once, there was a potential association between the “crossover” point occurring at a longer scale and a more favorable cognitive outcome.

To our knowledge, this is the first study to examine the extent to which EEG signal complexity in the awake condition versus the anesthetized/surgical condition is associated with postoperative delirium or inattention severity. Our data are unique in showing that the complexity of a physiologic signal may change in different ways during an acute stressor depending on the scale at which it is measured.

This certainly makes sense if different scales result from the outputs of multiple physiologic control mechanisms, each acting over its own frequencies and timeframe, yet all dynamically and adaptively responding to the same physiological stressors, namely anesthesia and surgery. Admittedly, more investigation is needed to determine whether the MSE crossover point could become a useful clinical predictor of delirium risk. That said, if future research finds that the “crossover” point is predictive of delirium, studying its mechanistic basis may shed light on the etiology of delirium itself. 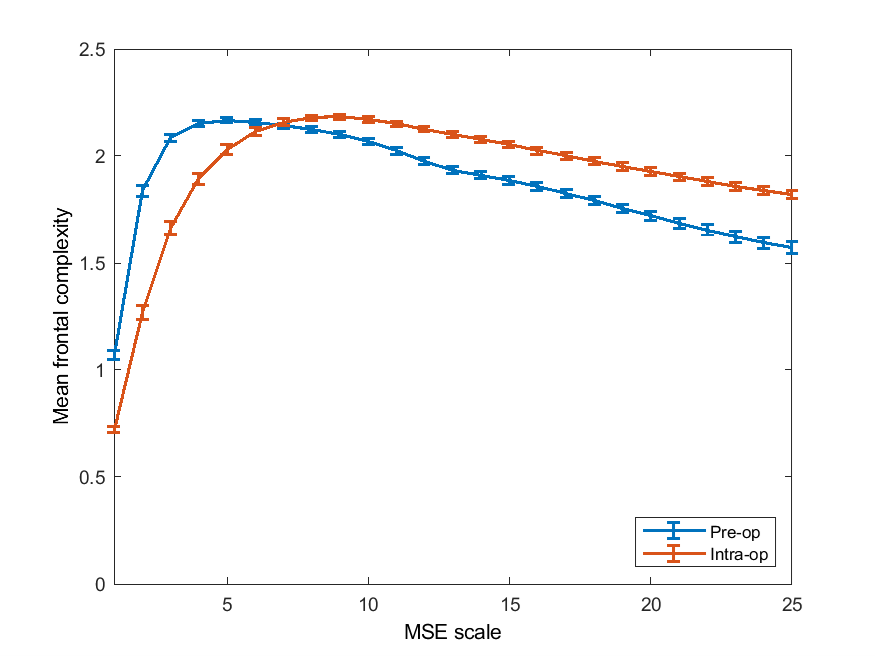 Figure 1: Frontal complexity (entropy) values (Y axis), by time scale (X axis), averaged across all participants with standard error bars shown. The blue line represents the preoperative awake/eyes closed EEG recording. The red line represents intraoperative/anesthetized EEG recording. Note the clear crossover point between scales 7 and 8, where the pre-operative complexity values are higher (compared to intra-operative complexity values) to the left of this point but are lower to the right of this point.