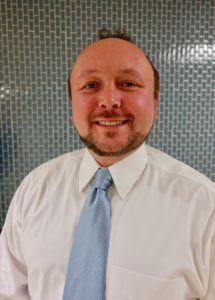 Dr. Adrian Austin, delirium researcher and physician at the University of North Carolina.

Adrian Austin is a pulmonary critical care physician, geriatrician, and delirium researcher at University of North Carolina-Chapel Hill. He leads the UNC-CH working group of investigators (“I-DUNC”) for better delirium assessment and education. Adrian currently has two delirium-related pilot studies underway at UNC: a tablet-based delirium assessment tool for home use and a pharmacogenomic study of dose and response variability among mechanically ventilated ICU patients.

How did you get started as a delirium researcher?

I came to UNC to do my internal medicine residency with the intention to do pulmonary critical care afterwards. I stacked my residency with a lot of critical care time, and also, I had a lot of geriatrics time. The majority of patients on both those services were delirious, and it complicated the management of just about everything. So that got me thinking about what is going on with delirium and what we should be doing about it. Back then, people didn’t call it delirium. Patients were just ‘confused.’ … Well, why is everybody confused?

During my residency, (Division of Geriatric Medicine Chief) Jan Busby-Whitehead talked me into spending a year with her in geriatrics where I got more formally exposed to delirium, and that’s when I started thinking about the issue as a research approach.

Also, on a personal note, when I was in medical school my grandfather had a cardiac bypass that went awry, and he was very confused for weeks after that and never really got back to being himself.

One of my two pilot studies involves development of a video- and tablet-based delirium assessment tool. The HIPAA-compliant videoconferencing software is based on the CAM and can be used by families and caregivers in a home setting.

Initially, in the post-operative period, we observed that people who were delirious were being sent home. Which leads to the question, is that the right thing to do or not? My perception is that 20 years ago people were more frequently discharged to nursing homes while they were delirious. But current care models (and insurance drivers) are to get people home, which lends itself to a new research environment. My goal is to use the tablet to evaluate the effects of patients who are discharged while delirious.

It may be that returning delirious patients to their home environment is appropriate, or it may be that returning them home while confused, with new wounds and new opiate prescriptions, isn’t a great thing. But we don’t know. I’d like to answer that question. Currently, to learn more we’d have to send somebody to the patient’s home, which is just too costly. My hope is that this remote tool will provide a financially feasible way to assess for delirium in the home and allow us to conduct ongoing future research in this environment.

What do you see this research leading to?

I’m developing a tool that researchers can use to look at delirium-related outcomes of various post-acute populations: post surgical, post ICU, post geriatric admission patients, and also patients transitioning from nursing centers to home. There are numerous research questions that can be explored if you have a tool to assess people in their home. I’m interested in chipping away at the question of whether discharging delirious people to their homes is the right thing to do or not. There’s clinical equipoise on that. I don’t know, personally, and sometimes I struggle with that question. Having some data to drive clinicians on that question, I think, would be immensely helpful for multiple specialties.

When patients are mechanically ventilated, we frequently give them some sort of opiate or sedative to try to maintain comfort on the ventilator. Granted, we do try to minimize sedatives to help them get off the ventilator sooner, but some patients do require some degree of sedation. Two drugs we use frequently are morphine and fentanyl. Two problems with these drugs are their ability to induce delirium and the variability in dose and response that we frequently see among patients. You give, say, an arbitrary dose of 2 milligrams of morphine to Patient A and they might be comatose for some period of time. The same dose given to Patient B might have no effect. But you give that dose to Patient C and achieve the state that you’re looking for, which is they’re calm, alert, and interactive, and in no discomfort. And so why is there that variability?

Certainly, weight plays a role in volume and distribution, but what we’ve learned over the past few years in the genetics world is there’s genetic variability in the processing of opiates, both in how the drug is broken down and how the drug is utilized. Our thought is that genetic variability accounts for some amount of dose response variability. The ultimate goal is to be able to do genetic testing on every patient who comes into the ICU. This might consist of a cheek swab that we’d process in our lab that produces a readout of an identified set of genes that are most important for the metabolism of this drug. We could use this to build a profile that identifies whether a patient is likely to be a high metabolizer or a low metabolizer of a certain drug, which allows for more appropriate dosage or potentially an alternate drug. So, it would be precision therapy, based off your genetics.

How do you see researchers using this work?

First, ideally, we can create a guide for personalized patient sedation profiles.

Secondarily, the two drugs I am working with represent just tip of the iceberg. I chose two drugs we commonly use, but many people still get antipsychotics and benzodiazepines in the ICU. And there’s a lot of interest in the new sedating medication Precedex, as well. The interplay of genetics with the effects of those medications is unexplored, so that will be something to look at in future research.

Ultimately, 30 years from now, wouldn’t it be great if, for any drug that you put a patient on in an acute setting, you could rapidly genotype them and know where to start with your dosing? I don’t think that’s a pipe dream.